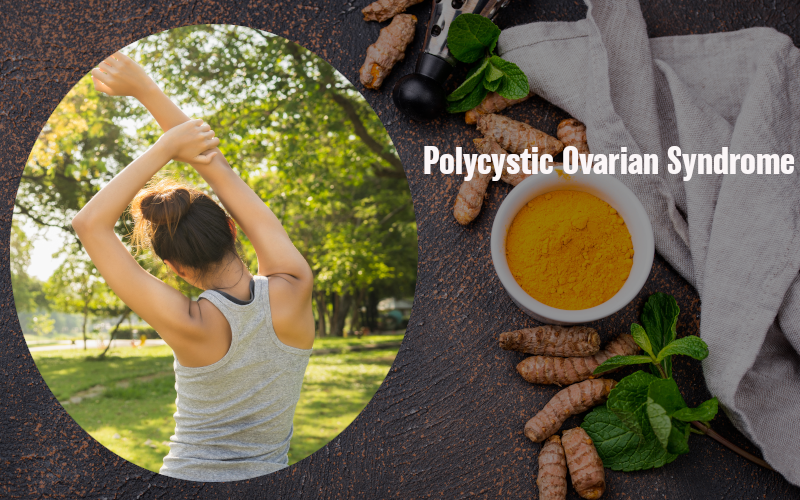 Polycystic Ovarian Syndrome (PCOS) is a heterogeneous disorder characterized by excessive androgen production by the ovaries mainly, which interferes with the reproductive, endocrine, and metabolic function.

Changes in lifestyle, diet, and stress of modern society have led to an increase in the incidence of PCOS. PCOS in Ayurveda was correlated with Aarthava Kshaya.

In Ayurveda, the body is seen as a living organism, in which the three doshas-Vata, pitta, and Kapha must be balanced.

PCOS is fundamentally a Kapha-induced problem, the reproductive system remains in the balance because of all three doshas that serve specific functions in the ovarian and the menstrual cycle.

It is happening when Kapha and Vata are aggravated, causing irregular periods, excessive hair growth, weight gain, and hormonal imbalance. Ayurvedic treatment has a holistic approach towards the management of PCOS.

Common symptoms of PCOS include:

Some of the factors that lead to the condition of PCOS are the following:

Ayurvedic treatment for PCOS- Snehana with Pippalyadianuvasana Thaila and Virechana with Hinguthriguna Thaila.

Ayurveda is a holistic approach that recommends treatments that include wellness therapies, herbal formulations, diet, and exercise. Among them, the most important is the combined effect of Snehana with Pippalyadianuvasana Thaila and Virechana with Hinguthriguna Thaila to cure polycystic ovarian syndrome.

In PCOS, there is Nashtarthava which means the loss of ovulation as well as menstruation.

Kapha Vatha Avarana causing Artavanasha which is explained as Nashtarthava by Susrutha can also be considered in this particular disease.

Vatha is the cardinal Dosha vitiated in all these conditions. So the treatment modalities which correct Vathavaigunya can be adopted here. By considering the above facts Snehana with Pippalyadi Anuvasana Thaila and Virechana with Hingutriguna were selected.

The first step is that the symptoms were assessed before starting treatment using a case proforma, ultra-sonogram, and necessary lab investigations.

Snehana, or Oleation Therapy, is one of the most important therapies that prepare the body to receive specialized Panchakarma treatment.

It involves the application of medicated oils, ghee, and herbs to the body internally and externally.

Polycystic Ovarian Syndrome is the leading cause of female infertility and one of the top reproductive endocrine disorders in the world. The treatment modalities Snehana, with Pippalyadi Anuvasana Thaila and Virechana with Hinguthriguna that are found to effective in the management of PCOS especially in the normalizing menstrual interval, reducing the volume of ovaries and reducing the BMI(Body Mass Index)due to it Kaphavatahara, Srothoshodhahara, and Vathanulomana properties.

All the information is collected from various Ayurvedic books and always consults an Ayurvedic practitioner before starting any herbal medicines for treating PCOS.