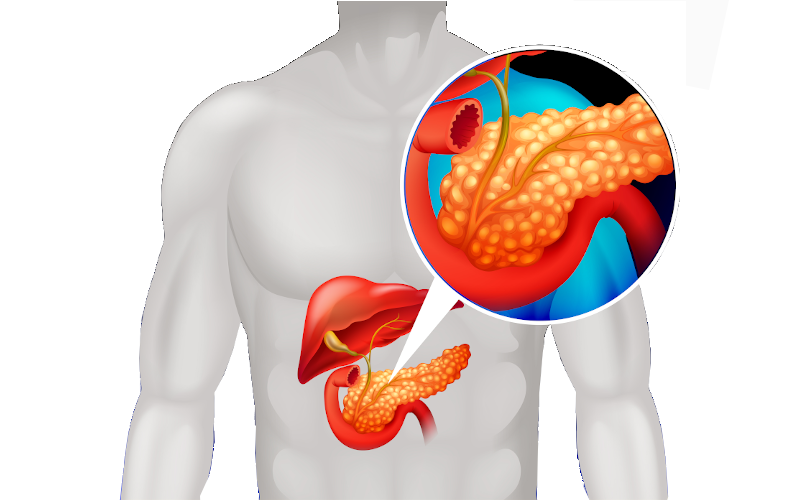 According to Ayurveda, Pancreas is known as ‘Grahani’ which means the seat of Agni, and Pancreatitis is known as 'Agnyashaya’.

Agnyashaya can be caused due to imbalance of the Vata-Pitta element in Rasa Dhatu (digestive fire) in the initial stage. When the situation becomes worse, there are chances of Dhatu Kshaya means degenerative changes in Agnyashaya.

Pancreas is the largest gland in our body and produces essential digestive enzymes and regulates blood sugar. The inflammations of the pancreas are known as Pancreatitis. There are various reasons for the inflammations and of course, Ayurveda has effective treatment methods to cure Pancreatitis.

Following are the common symptoms of Pancreatitis. They are,

Acute pancreatitis is a sudden inflammation of the pancreas, usually happens quickly and can be resolved with proper medical support. Acute pancreatitis causes infections, tissue damages, bleeding into the gland, cyst formation, etc.

Acute pancreatitis is the sudden inflammation of pancreatitis. Abdominal pain, fever, and diarrhea are the main symptoms of Acute Pancreatitis.

Chronic Pancreatitis can be easily identified by looking into symptoms like vomiting, oily stool, sudden weight loss, abdominal pain, etc. If we don't care about the symptoms, the situation will become worse and damages the Pancreas gland.

Of course, we cannot go and meet the doctor every time due to various reasons. Once we identify the symptoms and nature of Pancreatitis, there are certain home remedies available to cure Pancreatitis to an extent.

By following a healthy diet, Pancreatitis can be prevented positively.

By following a healthy diet, Pancreatitis can be prevented positively.

By following the above-mentioned lifestyle changes, Pancreatic diseases can be controlled very effectively.

All the information was collected from various Ayurvedic resources and always consult your Ayurvedic doctor before starting self-medication.

How To Cure Psoriasis Through Kerala Ayurveda

How to Treat Acne and Pimples by Kerala Ayurveda

How to Treat Kidney Stones with Kerala Ayurveda