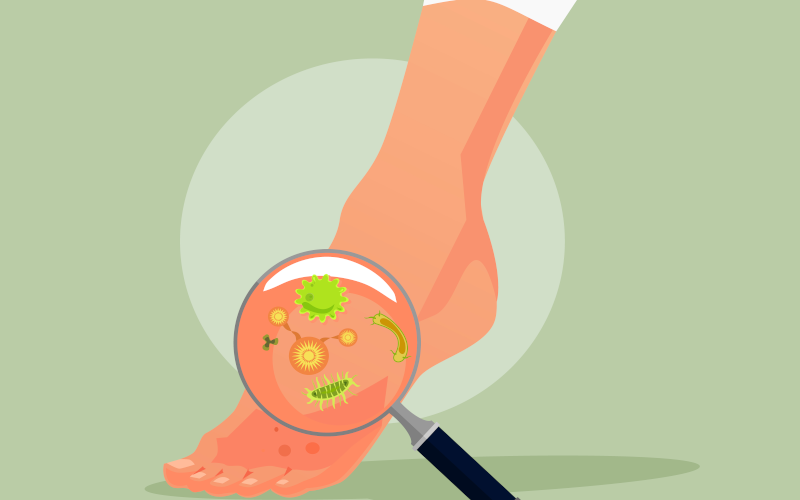 Fungal infections on the skin are very common diseases that usually affect the skin and the scalp. Fungi is everywhere like plants, on the skin, dirt, household surfaces, soil, etc. The fungal infection may spread from one person to another. We can find around 1.5 million species of fungi on the earth.

Fungal infections on the skin are very common and there are various effective remedies available in Ayurveda to cure skin infections. The treatment of all types of Kushtas are based on the predominance of doshas as understood by their features.

Causes of Fungal Infections on the Skin

Kushta may spread from one person to another person through touching or spreading. Following are the major causes of fungal infections on the skin.

Fungal infections on the skin may arise due to various reasons like Wrong food intake, intake of heavy food, intake of excessive food and intake of junk and oily foods. By knowing the causes of Kushta, we can control the skin diseases through proper Ayurvedic treatments.

Symptoms of Skin Diseases due to Vitiation of Doshas

Following are the major symptoms of Kushta.

1. Vitiation of Vata dosha in Kushta

Common symptoms of Vata dosha and how they affect the skin are:-

2. Vitiation of Pitta Dosha in Kushta

General symptoms of vitiated Pitta dosha in Kushta are:-

3. Vitiation of Kapha Dosha in Kushta:

Common symptoms of vitiated Kapha dosha in Kushta are:-

Symptoms of Kushta due to vitations of each dosha like Vata, Pitta and Kapha are different. If you are suffering from any one of these symptoms, don't worry. In Ayurveda, there are natural remedies to cure Kushta effectively.

Kushta can be classified into two and they are Maha kushta and Kshudra kushta.

Major skin diseases are called Maha Kushta. They can be again classified into seven(7)
They are:-

All the mentioned information are natural ways to cure Kushta and collected from various Ayurvedic resources. And, always consult an Ayurvedic practitioner before starting self-medication.